The Official Schedule for 2021

Friday following Thanksgiving through January 1 starting at dusk through 10pm. 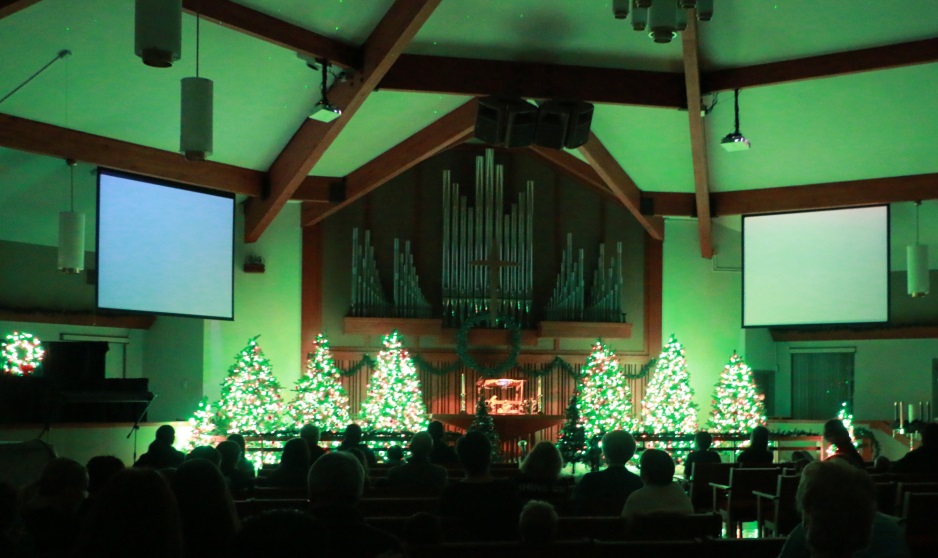 In 2005, Pleasant Hills concluded a previous production, The Madrigal. For the first time after 20 years of performances, the set included a forest of evergreens as originally imagined by the author of the script. At the conclusion of the performances that year, someone asked; “What are we going to do with all these Christmas Trees?” The answer came the following year when using a new technology, the forest of evergreens were lit and allowed to “dance to the music” on Sunday mornings for worship. A year later it was decided to open the doors of the church to the community for a new production, ChurchLights.

As an experiment for 2013, we moved a few of our lights outside for a 5 minute show every half hour after dark. Since then we have continued to add new lights outdoors including a 20 foot “Mega-Tree” in 2015 and increased the frequency of our shows.

Today, between both displays we now feature over 50,000 lights choreographed to Christmas music and videos and will celebrate the fourteenth season in 2021. We use thousands of independent channels, some with unique abilities to change color and other special effects. Combine all of that with face painting, puppets, crafts for children, live performances, hot wassail, and snack bar, it is two must see light displays! While many changes have been made to those original evergreens, and grown to more than simply six trees, our passion for music and the community has lived on.

Spread your love as a gift

Your donation will help us continue to spread the love of Jesus through our ministry at ChurchLights and through donations to the local food pantries we support.

ChurchLights is a team of volunteers passionate about celebrating Jesus not just at Christmas but throughout the year. We focus on providing FREE events with an emphasis on faith and fun for the whole family.